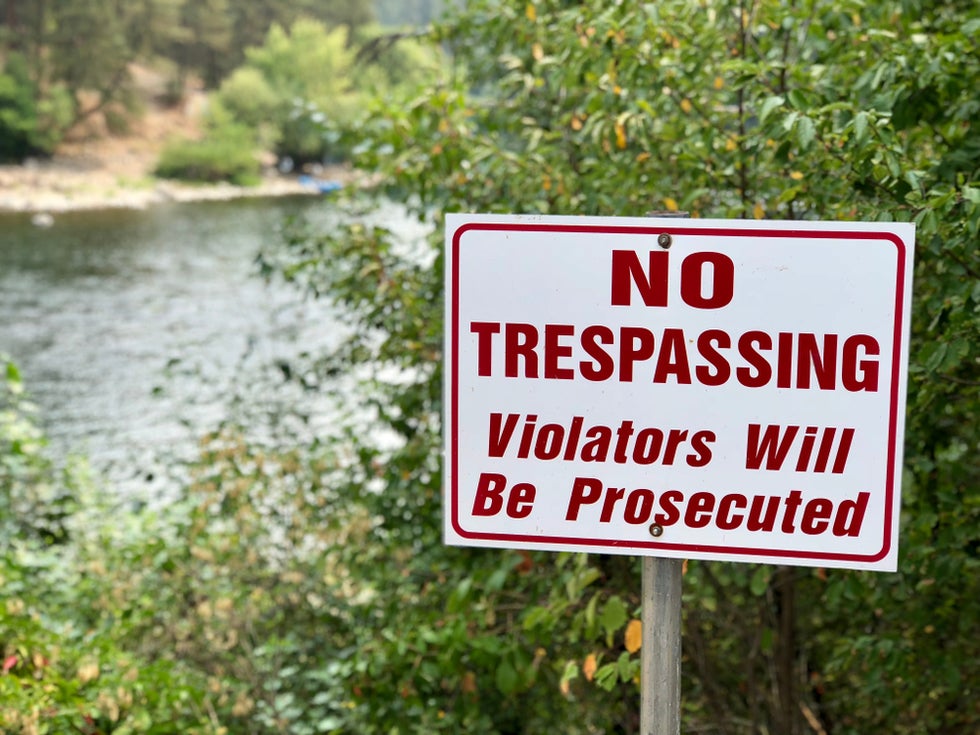 According to Idaho law, a person commits any trespass, by either:

◆ Cutting down, destroying or injuring any kind of wood or timber belonging to another, standing or growing upon the lands of another; or
◆ Carrying away any kind of wood or timber lying on such lands; or
◆ Maliciously injuring or severing from the freehold of another, anything attached thereto, or the produce thereof; or
◆ Digging, taking, or carrying away from any lot situated within the limits of any incorporated city, without the license of the owner or legal occupant thereof, any earth, soil, stone; or
◆ Digging, taking, or carrying away from any land in any of the cities of the state, laid down on the map or plan of such city, or otherwise recognized or established as a street, alley, avenue, or park, without the license of the proper authorities, any earth, soil or stone; or
◆ Willfully opening, tearing down, or otherwise destroying any fence on the enclosed land of another, or opening any gate, bar, or fence of another and willfully leaving it open, or using the corral or corrals of another without the permission of the owner; or
◆ Willfully covering up or encumbering in any manner, the land or city lot of another, without written permission from the owner or custodian thereof; or
◆ Every person, except under landlord-tenant relationship, who, being first notified in writing, or verbally by the owner or authorized agent of the owner of real property, to immediately depart from the same and who refuses to so depart, or who, without permission or invitation, returns and enters said property within a year, after being so notified; or
◆ Entering without permission of the owner or the owner’s agent, upon the real property of another person which real property is posted with “No Trespassing” signs, is posted with a minimum of one hundred (100) square inches of fluorescent orange paint except that when metal fence posts are used, the entire post must be painted fluorescent orange, or other notices of like meaning, spaced at intervals of not less than one (1) sign, paint area or notice per six hundred sixty (660) feet along such real property; provided that where the geographical configuration of the real property is such that entry can reasonably be made only at certain points of access, such property is posted sufficiently for all purposes of this section if said signs, paint or notices are posted at such points of access; or
◆ Entering the property of another and, being unprovoked, intentionally and without the consent of the animal’s owner, kills or injures a domestic animal not his own.

This is a misdemeanor charge and the person may be fined up to $1000.00 dollars, six months in jail, or both.

If during a trespass a person intentionally, and without consent of the animal's owner, kills or injures a domestic animal of another, they are not only subject to the criminal penalty but the court may also impose a civil penalty in an amount up to double the value of the animal or for injuries sustained, payable to the owner.