Stages Of A Criminal Case 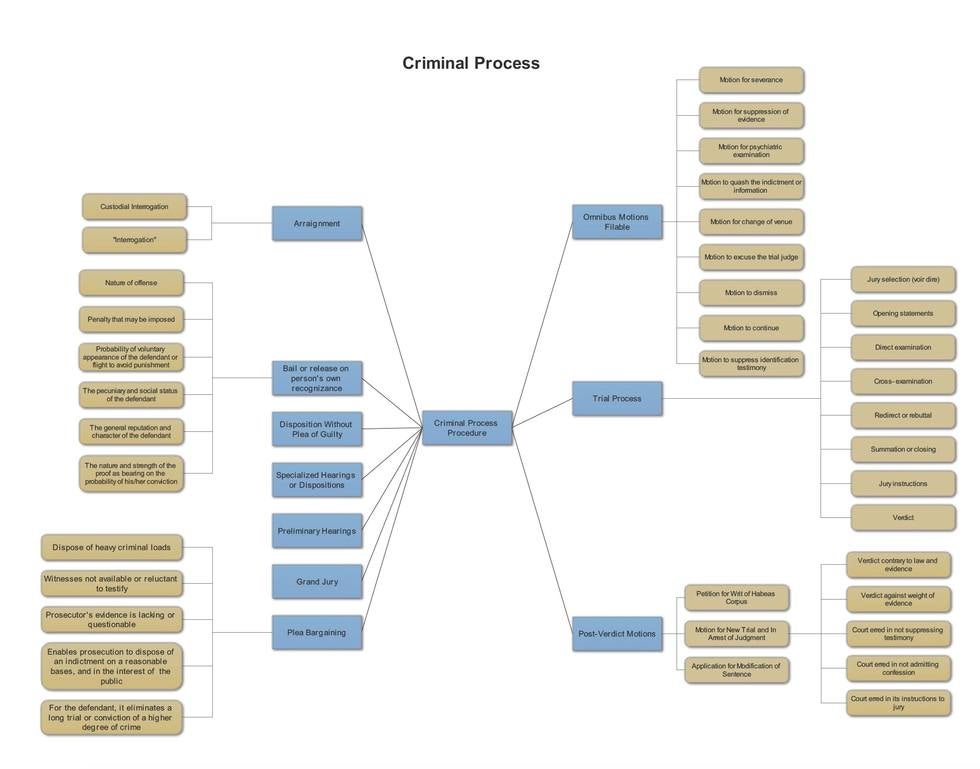 Below are the general steps seen in almost every criminal case. This is the most basic process, more complex cases can involve several other steps.

Investigation
During the investigation of a crime, the police review the facts, interview witnesses and gather evidence. This part of the process can be as brief as a few hours or as long as several years to complete depending on the crime and the complexity. It may involve asking a judge to sign a warrant to perform a search, polygraph examinations, crime scene recreation, substance testing, etc.

Once the police feel they have enough evidence, they will either file a report recommending charges with the prosecutor's office or execute an arrest.

Arrest and Bail
After being arrested, in many cases a suspect will go before the judge, who will either set bail or decline to set any bail so that the suspect must remain in jail until the trial. Bail is an amount of money that the suspect must post so that he or she can get out of jail. The amount of bail depends on a number of factors, the strongest of which is criminal history and whether the suspect is a flight risk.  If the suspect has a history of past failure to appears, this will likely result in a higher bond amount.

If a cash bond is posted, and the suspect shows up for all future court dates, the bail money is returned. If, however, the suspect doesn't show up or flees, the court will keep the money and issue an arrest warrant. This will not apply if the suspect utilizes a bail bond business as any amount paid to the bond company will never be returned to the suspect.

Arraignment
The accused first appears before the judge at an arraignment. At this proceeding, the judge informs the accused of the criminal charges, asks the accused whether he or she has an attorney or wants a court-appointed attorney, asks how the accused will plead to the charges, and sets a schedule for future court dates.

In most misdemeanor cases, the Defendant does not need to appear at the initial arraignment if they have retained an attorney, this is done by the attorney filing a plea of not guilty with the court via paperwork.

In felony cases, the defendant and the defendant's attorney must appear at all scheduled hearings, including the initial arraignment.

Preliminary Hearing
In felony cases, a magistrate judge will hold a preliminary hearing during which the prosecution must show that there is enough evidence supporting the charges against the defendant that the case can proceed to the next stage. This is an extremely low bar to meet. The hearing takes on the appearance of a mini trial with the prosecution putting on witnesses and the defendant's attorney cross-examining.

There is no Preliminary Hearing in misdemeanor cases.

Preliminary Hearing
If the prosecution does not want the case to proceed to a preliminary hearing, it can utilize the Grand Jury to obtain an indictment. This is a process where a jury determines if based upon the facts presented to them there is enough evidence to support the charges against the defendant. In this process typically the defense attorney does not get to cross examine the witnesses or present its own facts. This also typically takes place before the defendant is arrested or arraigned.

Pretrial Conference and Plea Bargaining
Generally a criminal defendant, through his or her attorney and the prosecution can negotiate an agreement that resolves the criminal matter. The time where this is often done in Idaho is called the Pretrial Conference. Usually, the prosecutor will agree to reduce a charge, drop some of multiple charges, or recommend a more lenient sentence in exchange for the defendant entering a plea of guilty.

Most cases are resolved through the plea-bargaining process.

Trial and Sentencing
At trial, the prosecutor and defense attorney will select a jury, give opening and closing statements, introduce evidence and question witnesses. If a defendant is found guilty, the court will impose a sentence, which may include incarceration, fines, court costs, restitution and probation.

In minor misdemeanor cases, the sentence may be issued right away. For more serious misdemeanor crimes or in felony cases, a separate hearing will be held often months after the trial or entry of plea. Between the date of trial and the Sentencing Hearing a Pre-Sentence Investigation will be conducted which outlines many of the factors the court may want to consider during sentencing.  At the hearing the prosecution and defense will submit evidence and arguments regarding what the appropriate sentence should be. In Idaho, a judge will decide the sentence.